Last summer, we had the pleasure of featuring Kevin Mahler, Director of Development at Autism Society of Nebraska on the Enable blog. His post celebrated disability pride and highlighted some of Autism Society of Nebraska’s recent work. In honor of April’s Autism Awareness Month, we are thrilled to feature an update from Kevin about his organization and to raise visibility for their work in the community.

“This Autism Awareness Month, we celebrate all the strides we have made in the last decade in increasing awareness of the nature and the prevalence of autism in Nebraska and throughout the world. As awareness has increased, we are now seizing opportunities to celebrate the differences and talents of people on the autism spectrum. One such example is our annual Autism Society of Nebraska Autistic Pride Day – see autismnebraska.org for details on this year's event”. 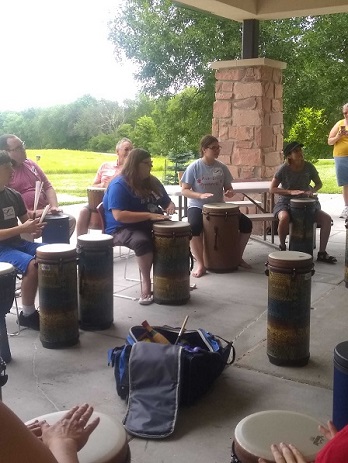 On June 22, Autism Society of Nebraska (ASN) celebrated autistic pride at an event at the Hilltop House in Lincoln, Nebraska. The day featured a drum circle, a talk by Nebraska-based blogger Amanda Ebke, food and drink and community. The event was open to all ages and was particularly welcoming to adults on the autism spectrum and their families.

In the words of Autism Society of Nebraska board member Janine Brooks, “Autistic Pride shows others we are proud of being who we are, not what we are. Having pride in ourselves demonstrates our right to live a happy, fulfilling life as those considered neurotypical.”

Autism Society of Nebraska seeks to build pride among people on the spectrum by promoting the three “A”s—Awareness, Acceptance and Autonomy.

One aspect of autonomy, in some cases, is managing or co-managing one's finances. Autism Society has been proud to host Enable at events over the past few years to share information with people affected by autism about the banking options that are available to qualifying people in Nebraska. Enable’s message of empowerment dovetails excellently with Autism Society of Nebraska’s belief in autonomy and doing what is in the best interest of each individual.

Autism Society of Nebraska’s philosophy, grounded in a governing document called the “Options Policy,” does not believe that autism is a deficiency, but rather a difference in the way certain people’s brains are organized. While much is yet to be discovered about autism through neuroscience, Autism Society of Nebraska believes in the dignity of every person and seeks to highlight the contribution that people on the spectrum can make to their communities— in autistic communities, in neurotypical communities, and society at large.

Later this year, ASN Board Member Janine Brooks and ASN community volunteer Mara Fritts will present at the AuSM (Autism Society of Minnesota) conference for adults on the spectrum about autistic pride.